Charlie Blacks II February 11th 2016 Other
Our oceans have been going through a lot lately, we’re mostly to blame though. From the radiation leaks in Japan, to the oil leaks in the Gulf of Mexico, to the floating islands of plastic we’re all to blame for, we’re slowly destroying the main element of the entire earth, the ocean. We also have to deal with mother earth being totally unforgiving as people go missing all the time due to boats, planes, and swimming expeditions gone horribly wrong. Or during natural disasters such as tsunamis or hurricanes that causes people to be pulled out to sea never to be found again… this is sort of depressing, we know, but it’s eye opening to realize how we give and take in regards to our water sources and environment. Anyways, we’re here today to talk about a different issue involving our ocean climate, over the past several years 16 shoes with severed feet in them have been found after washing up in either Washington or Canada’s British Columbia. This may be the creepiest discovery this Canadian couple may have been through while just taking a stroll on the beach. Take a look for yourself.
Charlotte Stevens and her husband were walking on Vancouver Island's Botanical Beach this past Sunday, February 7th, when they came across a single New Balance running shoe. Everything seemed normal until they looked inside the shoe and discovered whoever was wearing it last, never took it off. Charlotte still in shock told news outlet CBC the following about her and her husband’s discovery, “He picked it up and brought it out on to the beach, and we had a look at it for about five minutes and we thought, it almost looks like there is an actual foot bone in it.” The shoe was later given to a coroner and they determined that whoever it was wearing the shoe died between March 2013 and last December and the amount of decomposition of the foot led the coroner to believe that whoever’s shoe this belonged to was submerged for a good amount of time. What’s even worse is that this is nowhere near the first time a discovery like this been found in the area. 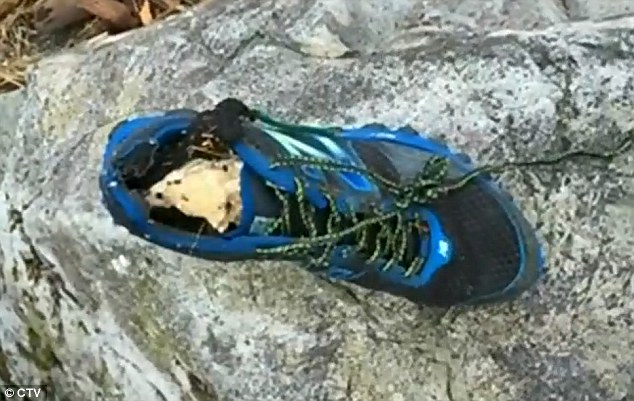 Over the past nine years, 16 feet, mostly running or hiking shoes and right feet, have been found in Washington and British Columbia. Even with the high amount of severed limbs being found, authorities claim that this is no cause for concern. 10 of the 13 feet found in British Columbia have been linked to suicides or accidents, but still haven’t ruled out the possibilities of any foul play involved. Residents and authorities have come up with a couple of theories involving the foot epidemic that is plaguing the Northwest. Some say that natural disaster is the cause of this conundrum, others say human trafficking could be a contributing factor, organized crime is another theory, even a serial killer has been brought up as a reasonable explanation for the feet being found. This is really weird and creepy… what do you guys think is the reason for these strange discoveries?
Share on Facebook

Watch What Happens When This Tiger Notices This Pregnant Mom's Belly

Archaeologist Discovers Giant Sphere Thought To Be Oldest In The World

This Is The Difference Between Liking Someone And Loving Someone